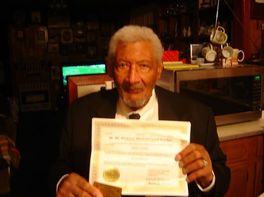 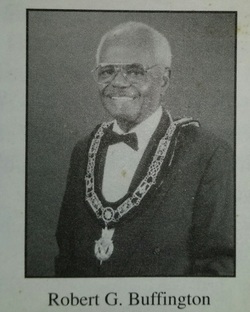 Buffington and his wife Ruby had a daughter, Fran Posey, and a son, Don Buffington, a granddaughter, Dana, a grandson, Cleveland, and a great grandson, Kylon. They all reside in Baton Rouge. 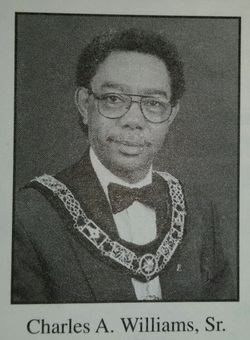 ​Charles A. Williams, Sr., was a 33rd degree Mason and served as Grand Treasurer of the Most Worshipful Prince Hall Grand Lodge of Louisiana. He also served as Treasurer for the 3rd Masonic District, the Illustrious Potentate of Ismael Temple #154, and Second Lieutenant for the Pelican Council of Deliberation. He was a member of Blazing Star #114 and had previously served as Worshipful Master of that Lodge.

He was a member of Baton Rouge Consistory #179, Royal Arch Masons, Knights Templar, and Blazing Star Chapter #113,Order of the Easter Star.

He is a graduate of McKinley Senior High School.

He retired from Louisiana State University in 1996 after 33 years of service as a Maintenance Supervisor in the Housing Department.

​He was married to Lois Harris and they had three sons; Charles Jr., Gregory, and Cardell.
﻿Brother Isadore E. Tansil, Sr. 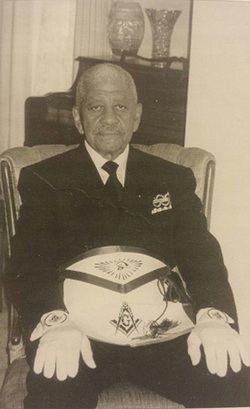 Isadore E. Tansil, Sr., was born December 7, 1917, in Walls, Louisiana, to the union of Isiah H. Tansil and Annie Hariett Brown Tansil. At the age of two, his grandmother, Sarah Jones Brown, brought him to live in East Baton Rouge Parish. At the age of six, he started school at Reddy Street Elementary where he finished the seventh grade in 1930 and started at the newly completed McKinley High School. He quit school in 1924 with no unforeseeable possibility of attending college. His main focus in life was finding a job to help his mother.

He sold papers, strawberries, watermelons, worked at a shoeshine stand, delivered sales papers, groceries, washed windows, and did anything to stay out of trouble and keep a "good name" for his mother, who was a good Christian, honest, hardworking seamstress who tried to build character for her son to follow.

Mrs. Onita Nelson made him wash dishes, windows, and cut grass for skate-wheels. Mrs. Eliza Lawless taught him to respect all women, learn to read, and interpret. This helped him to fill the void of a certified education. He gives thanks to God for whatever talent he has obtained.

On December 7, 1947, World War II began, but he continued an exemption until September of 1942. His service began in October 1942. In 1943, he was chosen to represent his company to attend Edgewood Arsenal Chemical Warfare School in Edgewood, Maryland.

Before the year ended, he was chosen to form a new company in Gadsden, Alabama, near the Smoke Generator Company. He was sent to non-Commission Officers School, Camouflage School, Savanna Ordnance School, and Spawlding College in Savanna, Illinois. After this school, he was chosen for Ordnance Ammunition Inspector School, but was sent overseas to Europe.

He was baptized by his uncle, Pastor Morris J. Hubbard of Beulah Baptist Church in 1947, where he sang in the choir. Later, he transferred to Mt. Zion First Baptist Church, pastured by the Reverend Dr. Theodore J. Jemison. He served as President of the Ushers Board, President of December Month Club, Boys Scout Organizer, and Young Adult Youth Leader of Church School. When the YMCA was named, he was chosen as Mr. Fred Joseph's night manager. He helped formulate Baton Rouge Big League Softball, representing Baranco-Clark as team manager and Shortstop Counselor. He helped softball make its way to the girls and boys under organizer Willie Spooner to its prestige of organized Little League Base Ball, a history in itself with many used Sunday evenings.

Brother Tansil served as Senior Warden and represented East End Lodge #209 on the initiation team as Chaplain with Edward Knox and Robert Young as Master. With the help of Paul Williams, he built a most impressive burial team.

He says, "I do not have a formal education, but God has let me taste the sweet nectar of love for my fellowman. What I love is God for all of us. Thank God."

Brother Tansil wanted to share this thought for those who have worked and someone has tried to tear it down for some unknown reason:

When things go wrong as they sometimes will.
When the road you're traveling seems all uphill.
When your funds are low and your debts are high.
When you want to smile, but you have to sigh.
When cares start pressing you down a bit.
rest if you must, but don't quit.

He also adds, "Let God show you how He wants things done. He know how to move obstacles. Use the sense God has given you."​
Powered by